Paris fascination is impending to i-City with the arising of Parisien Tower. The concept of the high-rise residential tower is fully inspired by the modern romanticism, glam and luxe of Paris lifestyle. Enjoy the romance atmosphere of Paris, the capital city of France, right here in Malaysia.

Made for modern urbanites that appreciate contemporary, yet classy compositions, all units will come fully furnished with slick furnishings. The built-up ranges from 466 to 769 square feet. Discerning buyers will find every stage, from the inviting lobby to the high-class penthouses, are all crafted with impeccable architectures inspired by the capital of love.

The Parisien Tower will only be minutes away from other supreme amenities, especially with a direct linkage to the future 1.5 million square feet astounding Central i-City Shopping Centre. Perceptive Parisien-owners can relish a modern city life with a twist of sophisticated flair.

Refined facilities will be available in the all-in-one facilities podium. Be pampered with privileged features like swimming pool, barbecue area, gymnasium room, multipurpose hall and so much more. 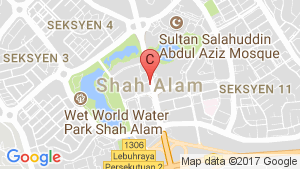 There are a number of other Commercial developments located in the area of Parisien Tower including:

Back to search results
This lisitng provided by i-City's property developments The information contained in this listing froms a property advertisement of which dotproperty.com.my has no control over content contained within furthermore, dotproperty.com.my, cannot guarantee the accuracy of listing information, linked content or associated resources provided by agencies or developers for the purpose of advertising
Join or sign in