Ho Chi Minh City may borrow a city planning tactic from Bangkok that could have long-term implications on the metropolis’ skyline. The Department of Construction made a proposal that would require newly launched residential developments meet certain criteria while aligning with technical and social infrastructure goals.

The most notable change would require developers to stop construction of high-rise apartment buildings in downtown Ho Chi Minh City and focus building these developments along the first metro route in the eastern part of the city. Districts 2, 9 and Thủ Đức is where a majority of the new projects would be launched.

According to a Vietnam News report, an emphasis would be placed on high-rise residential developments that provide easy access to public transportation infrastructure. The Department of Construction believes the strategy could ease some of the city’s problems like flooding and congestion if implemented correctly.

The end result could see the Ho Chi Minh City skyline develop around the new Metro Line similar to how high-rise condominiums now follow Bangkok’s public transport system. Most stations along the BTS Skytrain Green Line now have clusters of high-rise buildings surrounding them. It is a similar story around the MRT Blue Line. Even under construction public transportation routes now have high-rise residential developments being built around them in the Thai capital.

Should the Department of Construction proposal go into effect, the Ho Chi Minh City skyline could see similar growth. The key difference would be the government overseeing improvements to surrounding areas, something that was not required by the government in Bangkok.

Test runs on the Ho Chi Minh City metro line will start later in 2020 with service expected to begin next year. Construction of Line 2 is also slated to begin in the near future and government plans call for four additional rail lines to be built. What are the tallest buildings in Singapore? Be a part of Hua Hin’s enduring legacy 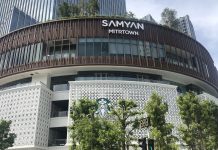 The tallest buildings in Cambodia: here’s what you need to know

The first edition of Dot Property Magazine in 2020 is truly special. We’ve launched a special double issue is one...